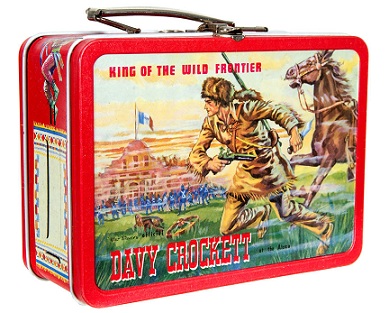 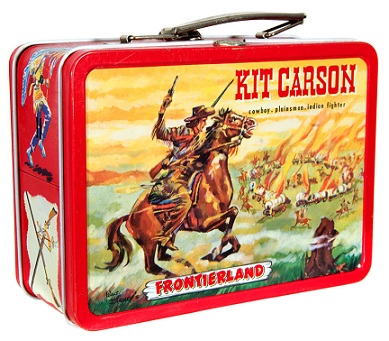 After publishing the two recent articles on tuned..

However, in the process of my research I came across this lunch box quiz which is a lot of fun and actually has some really good questions. I definitely learnt a lot, but I’m too shy to tell you my score!

You can check it out here (only takes 3 minutes):

By the way, if you are enjoying the articles on Tin Lunch Boxes HQ then please subscribe to my RSS feed by hitting the button at the top right of the page. 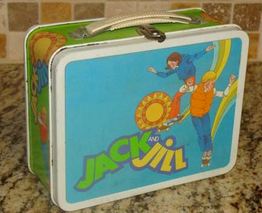 If you type the phrase “metal lunch boxes” into Google or a similar search engine then you are probably looking for one of two things: Either you are interested in collectible lunch boxes or you just wish to purchase a product for everyday use.

Of course, purchasing a box is very straightforward. There are a ton of specialist retailers that you can find online as well as more generic sites such as Amazon and eBay which have many items listed. 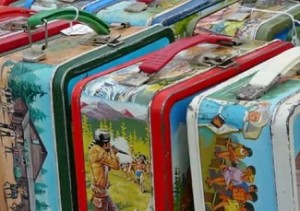 However, getting started in collecting metal lunch boxes is somewhat harder as although there is plenty of information available it tends to be widely scattered so finding exactly what you are looking for is often difficult. With this in mind here are 3 tips for all of you who are thinking about starting a collection:

Prices on online auction sites can be a little baffling sometimes. Often the seller has discovered a long lost lunchbox in his or her attic or garage and has decided to sell to raise some extra cash. In these cases list prices may be inappropriate and although this means that they are often too high it is sometimes the case that the seller has not realised the true value of the piece they are selling! For this reason rule #1 is to always cross check prices! For example, if the box is listed on eBay then try checking on Amazon and vice versa. If in real doubt then consider consulting a price guide.

The prices of vintage metal lunch boxes can fluctuate throughout the year. The time at which prices are most likely to be inflated is during the Summer Back-to-School period. This is of course when parents are busy equipping their children with all the kit they will need for the new school term and this of course includes lunch boxes! I would speculate that this process invokes a certain degree of nostalgia in many parents who then proceed to go hunting for vintage pieces on the net!

3. Watch Out for Reproductions

Many of the classic vintage pieces from the 1950s and 1960s proved so popular that they are still manufactured today. The giveaway is obviously if you find more modern vinyl or PVC boxes but sometimes replicate metal lunch boxes are still made. Some examples, include Disney School Bus, Hopalong Cassidy and the Roy Rogers metal lunch boxes. In terms of the latter a total of 7 version were produced in the years to 1957. So if you were interested in buying one of these then take some extra time to make sure of the exact year.

Good luck, and please don’t forget to leave your thoughts in the comments section below!

An Interview with Stacey McCaffrey about Vintage Lunch Boxes

On my hunt around the “interweb” I just came across this excellent article. Amongst other things it features an excellent interview with Stacey McCaffrey who owns Etsy.com store Vintage Jane. Interesting to see that she suggests that the reason lunch boxes are so collectible is nostalgia.

Well I have to say Stacy, I couldn’t agree more!

Please do read the interview – it is well worth 3 minutes of your time!  Here is a link.

I also took a moment to search Etsy.com for products (never actually done this before!). Quite an assorted collection was returned but my favorite is this 1960’s Disney Studios Schoolbus box: 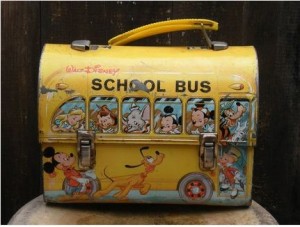 Metal Lunch Boxes from the 1980s

I just found this site which features a number of (eBay listed) metal lunch boxes from the 1980s. Ok, so there are some plastic boxes in there too but still a pretty impressive list don’t you think? 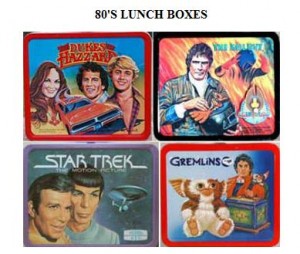 Star Trek, Gremlins and my all time favorite The Dukes of Hazzard which is listed for the tidy sum of $135.

In terms of price these are a world away from the collectables of the 1940s and 1950s but for me (as a 30-something) the 1980s decade raises the greatest levels of nostalgia in my heart! Actually, I am slightly surprised at how cheap some of these boxes are. $0.99 for a Mr.T? I wonder if the sellers of these items really know the true value here? I suspect the current owner of the “Vintage 1984 School Days Mickey Lunch Box Rare” does given that they are asking for $225 : – )

One lunchbox that I am really after is unfortunately not listed here. It is the Airwolf lunchbox. Out of the Knight Rider, Street Hawk and Airwolf series I much preferred the latter.

Overall, I think the jury is out on the 1980s as to whether it will become a classic and collectable decade. On the upside there are a lot of people with some real vintage memories of TV shows etc but on the downside there was an awful lot of memorabilia manufactured. I think we will have to wait until “supply” reduces as more boxes inevitably get lost and destroyed before prices will increase. Of course, this is one of the reasons why the tin lunch boxes of the 30s and 40s fetch such high prices at auctions: Supply was severely restricted due to the economic conditions during the Great Depression and the Second World War.

Tin Lunch Boxes – American was Built on Them! 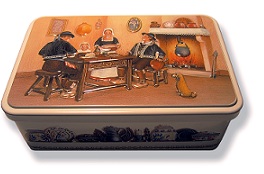 Tin lunch boxes first emerged over 100 years ago during the mid-19th century (David Shayt, National Museum of American History). Originally woven from straw, manufacturers later favored tin as the material of choice due to its robust and durable nature.

An important development in the early 20th century was the use of tobacco tins to haul meats. This, coupled with the subsequent invention of lithographed images on metal gave rise to the huge popularity of the many weird and wonderful tin lunch box designs which became incredibly popular with young people.

By the mid-1930s the first licensed character lunch box appeared on the market. Created by Geuder, Paeschke and Frey it featured a sliding tray, a handle and an iconic lithographed design of Mickey Mouse.

In retrospect, the period that followed this really can be regarded as the heyday for the tin lunch box. In fact everything was going swimmingly until the early 1970s when safety concerns (of all things!) contributed to its demise. Parents had become concerned that metal lunch boxes (by this time stainless steel lunch boxes rather than tin were the most popular) could be used as a weapon by children in the playground. Such was the ferocity of the protest that the Florida State Legislature eventually passed legislation on the issue with other states soon following suit.

Although there are undeniable benefits of contemporary plastic and vinyl designs (watertight, airtight and durable), if you’re anything like me the tin lunch box will always be your favorite! It gives me comfort to know that others share my feelings: Many of the early lithographed designs, especially from the 50s and 60s, have become surprisingly collectable. For example, a mint Isolina lunch box sold for $11,500 in 2003 at Chickens Go Moo, Inc auctions!

Always a sucker for nostalgia my all-time preference is actually for retro-looking shiny metal lunch boxes which were used so much by the American workforce during the early and mid-20th century. This is the design which I use 5 days a week at work. American was literally built on the tin lunch box!

I hope you enjoy this site and share my enthusiasm for a small but in my view important part of our history. I aim to continue building this resource over time and if you have any questions or comments I’d love to hear from you so please don’t hesitate to get in touch. I will reply to all messages.